Life here in the Texas Hill Country is just too much fun so I have decided that I have to start blogging again.

As many of you know we decided to acquire some Belted Galloways in May 2016. They were all one year old.

In February 2017, we sent the two older heifers (Mitten and Pretty Girl) and the newly acquired heifer BIG Girl off to meet the bull at Dan Rohrer's place.  They returned to our place in May and in June we found out from the vet that all three were about three months pregnant.  So we figured the calves would be here in December or January.

Surprise surprise, on November 14, Mitten had her calf while we were away that day.  Unfortunately, the calf was not alive but Mitten was standing guard over her.  It was a sad time for all of us.  She stood guard over the calf for more than a day.

On Monday, November 20, Pretty Girl started having her calf.  Needless to say we were filled with trepidation.  Luckily, my friend Susan had come to visit for the day.  She's a farm girl from Pennsylvania.  She stayed around when we realized the calf was coming.  After 45 minutes of labor, we decided to give Dan and then the vet a call.  It was now 5 PM and dark was approaching.   The vet said she would be out in a while.    To our surprise Dan showed up and he and Susan took over, providing much needed advice.  The vet, Lana, and a fourth year vet, Nathan, from Purdue arrived and started working on getting the calf delivered.   It was an amazing experience involving wenches and swinging the calf around by his hind legs.  :-)   And the calf was alive.   At some point, I remember thinking that I wished I had watched more Dr. Pol and that  Alaskan vet.

After the birth, we let Pretty Girl loose but she decided to have nothing to do with the calf and ran off.  We went looking for her in the dark and found her but she wasn't willing to follow us back to the pen even with range cubes.

After much, discussion, we decided to put the calf in the pen with lots of straw and Jack would stay with the calf until first light.  We let the calf loose on Tuesday morning and as luck would have it Mitten wanted to be the Momma instead of Pretty Girl.    We put Momma and calf together in the pen in hopes they would bond.

With no luck, we decided with Dan's and Susan's help to put Pretty Girl in the head gate and the calf with her.  The calf didn't want to nurse.  At some point, Dan suggested we milk Pretty Girl to stimulate her motherly instincts and Susan gamely took that task on.  At some point, I took over (it's not that easy to milk a cow) and we managed to get a small amount of milk from the momma which we mixed in with the calf formula.

All day Tuesday, we worked with Momma to get her to take care of the calf and in the afternoon, we worked with the calf to get it to drink from the bottle with no success using a combo of mother's milk and formula.  At some point, the Momma started pushing the calf away.  Of course, being new, we were worried.  Susan had stayed over night providing much needed moral support and talked with her nephews Ernie and Adam who raise cattle in Pennsylvania.  Before dark, Susan left the two newbies with the calf and momma.  So the newbies were all alone.

After a sleepless night, Jack and I got up Wednesday morning, made formula, and headed down to the pen again to try again with the cow and calf.  The momma continued to push the calf away even more strenuously so we gave up and decided to try to feed the calf.  He had been without food for 36 hours.  I put the bottle up to him thinking I was going to have to coax him again to try to eatand he decided the milk looked good and for the first time he ate.   Needless to day Jack and I were enthusiastic and had tears in our eyes.


The amazing thing is that Mitten and the other cows continue to hang around to watch over the calf.  The only thing so far that Pretty Girl had done is show some signs of protecting the calf.   We are going to be working with her and the calf again today to see if we can get that motherly instinct going. Our Thanksgiving was on Friday so we had plenty of time to work with the cows on Thursday.  At some point our son and wife, John and Danae, and grandson, Jarred  and our indoor daughter, Carolyn, got involved in trying to get Pretty Girl into the chute so we could put the calf with her.  After three hours we all gave up.  We fed the calf and decided to let Pretty Girl out of the pen.    In the evening we fed the calf again and let the calf out.   Immediately Mitten came over to take care of the calf.  Momma came over to visit but showed no interest in taking care of the calf. 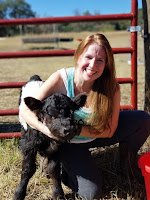 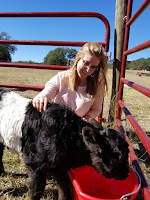 And immediately made a bee-line for the calf.  In between cooking, the calf was well-taken care of and many pictures were taken.

Our youngest son, Neil, and family arrived and got to visit the calf after turkey dinner.


Saturday, the calf is doing well and we have switched him to two feedings a day.  Of course, more of the family got to feed the calf.  The calf weighs about 50 pounds.  I'm not sure how we are going to feed him when he weighs 200 pounds.  But he is the cutest thing so I'm sure we will figure it out. 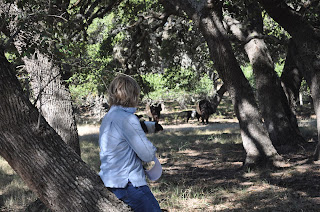 "Aunt" Susan came to check on the calf today.  It was an absolutely beautiful day!

We hope everyone had as good a Thanksgiving as we did.    We have much to be thankful for living here in the wonderful Texas hill country.