Some of you know that the Texas Hill Country is being hit with Oak Wilt.  Jack and I began our fight with it in June 2012.   In late 2012, we purchased an additional 43 acres in front of our existing house.  The land had over 600 trees on it and a stock tank.    In 2013 we discovered some of these trees had oak wilt.

In 2013, we treated the trees that could be saved with a fungicide and had a six-foot trench dug around the trees to try to contain the spread of the disease to the rest of the trees.   We continued this process through 2013 and thought we had stopped the spread.

Unfortunately in late 2014 we discovered the disease had jumped the trench so we treated with the bigger trees with fungicide again and dug an even longer deeper trench almost encircling the diseased trees.  Click on any picture to get a better view. 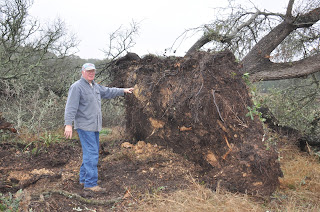 In February this year we hired Chad Ottmers who turned out to be a fifth cousin descended from Conrad Bock, to bring his 150 HP bulldozer over and began pushing over trees. 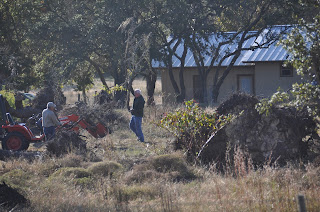 Since February, Jack and Luis have been putting those trees in burn piles.  Then they burn them after it has rained here or even during a rain.  If you ever wonder why farmers are leaving all their dead trees in the fields, wonder no more.

These lovely big oaks have big roots and it takes large equipment and hard work to remove them.


Jack's tractor at the start of this project.  This might be a foreshadowing of things to come.... 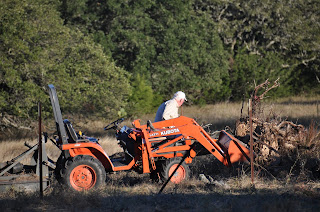 Unfortunately  in June 2015, this year we looked out one day after a storm and discovered that one of our beloved trees between the quilt haus and the Heinrich Lindig cabin had a dead limb.  Here are the trees this past spring! 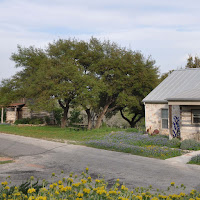 At the time, we thought lighting had struck it. This mott of live oaks was far from the other diseased trees and it was a new infection!.  So fungicide was applied to no avail and we lost these trees within two months.

Here is a picture of those same trees this fall.   It's hard to believe but we went through a grieving period for these once beautiful trees. 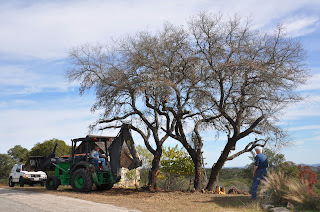 Because these trees were big and between the two buildings, our neighbor George Irwin came over with his " brush claw" to push over these trees in early December.  He then picked up the trees and carried them over the fence. 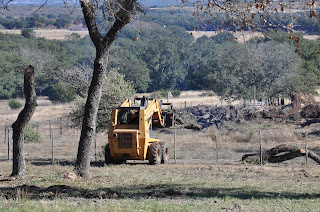 Jack tried to cut off the limbs to decrease the weight of the trees but barely kept up with George and his big equipment.

However, at some point, George's equipment was too small to deal with the roots of the big trees so we rented a back hoe so that he could dig out the roots and push over the trees. 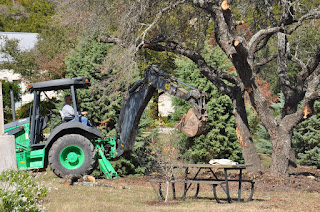 Now, all those trunks and branches are sitting in the ditch waiting to be burned.  For those of you close by, it will look like the funeral pyres on the Ganges.   But don't worry, again we will be burning after a rain and have our sons and grandsons helping Jack.


At this point we have given up the battle and decided to plant new trees and push over the dead trees. We like to think we are returning the land to how it looked when the early German settlers arrived.